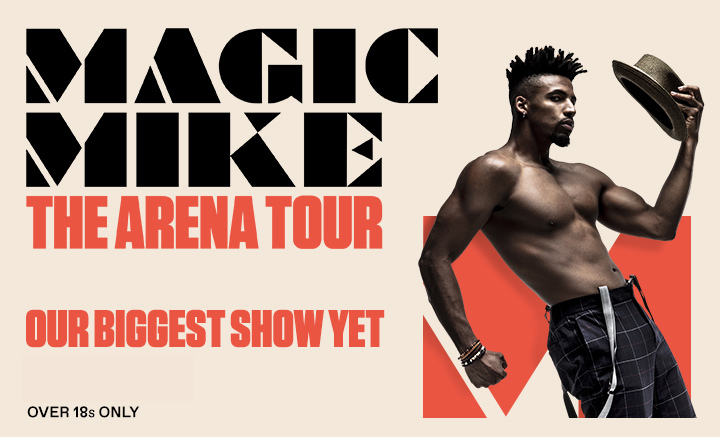 The team at Magic Mike – The Arena Tour is delighted that Liverpool will be hosting the Eurovision Song Contest in 2023. However, due to the scale and complexity of this event now happening at the venue, we are sorry to say that Magic Mike will not be able to take place at the M&S Bank Arena, Liverpool as scheduled. Everyone involved apologises for any inconvenience caused.

Ticket holders will be contacted by their point of purchase

Grab your girls. Tell everyone. This is not a drill.

With two hugely successful films starring Channing Tatum and the hit productions of MAGIC MIKE LIVE in London, Berlin, Australia and Las Vegas, MAGIC MIKE has turned up the heat across the globe. Now we’re bringing the sexiest, most spectacular new dance show in the world to M&S Bank Arena Liverpool.

More guys. More thrills. More Magic. MAGIC MIKE THE ARENA TOUR is our biggest show yet. Celebrate together again as some of the hottest, most talented guys on the planet come together for the once-in-a-lifetime, epic dance party that you deserve. After a year of being locked down, it’s the ultimate girls’ night out, best date-night-ever and most fun you’ll ever have with 10,000 of your closest friends all rolled into one. Best of all, we’re doing it all to celebrate you!

If you’re NOT into letting your hair down, partying with your friends and really, really hot guys, then it’s probably not for you.

So stop looking... and start booking for the biggest night out of 2023!

Please note this show is over 18s only.

Please note all tickets purchased will remain valid for the new date on Monday 24 April 2023.